This Pancit Canton will definitely make your occasions extra special. With squid balls, Chinese sausage, and chicken liver in addition to the chicken meat, shrimp and the usual medley of colorful veggies like snow beans, carrots, bell pepper, and cabbage. The good news is, it is also very easy to prepare! 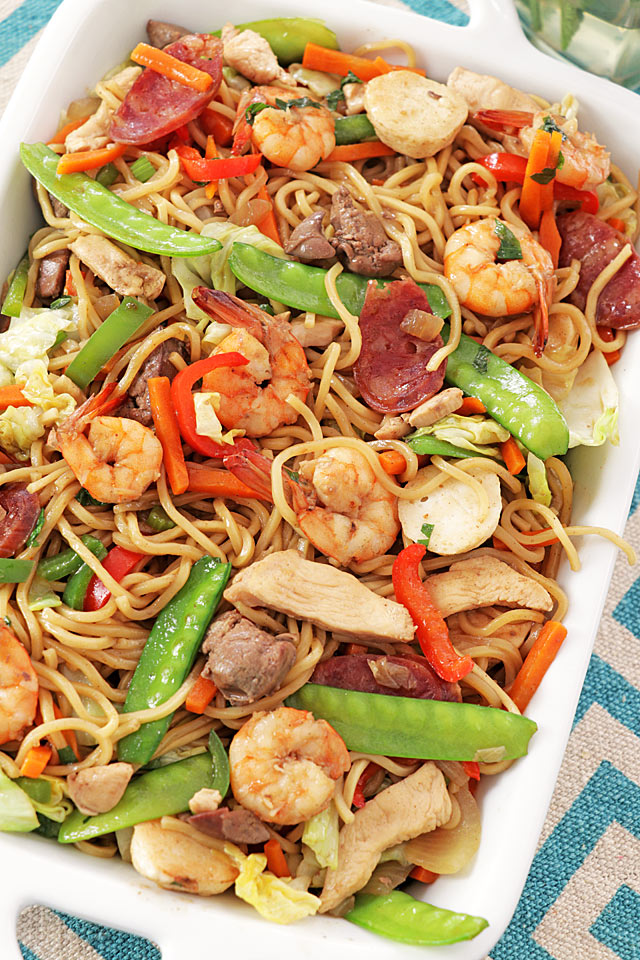 Armin loves Pancit Canton. I had to confess though that his first was an instant one. Yep, that pack where you cook the noodles in boiling water (or microwave if you are super lazy to boil water), drain them and little packets of seasonings are added afterward.

It was when we were still in Germany and I would hoard packs of instant noodles whenever we go to the Philippines or even just to an Asian store. I think it is a common thing for a Filipino who lives abroad. You crave for home food and even instant noodles would taste like heaven.

And I can't believe that Armin would like them. I was very pleased but I felt guilty as well. Thinking, what kind of food blogger wife am I feeding my husband instant noodles ??  So I cooked him a proper Pancit Canton some days after. Albeit a simple one since I can't get all the ingredients that I need all at once. But still, he really dug it!

Now that I have access to all the stuff needed to make it a lot better, I thought it was time he tries the real deal.

This special Pancit canton has squid balls, Chinese sausage, and chicken liver in addition to the chicken meat and shrimp. With a medley of carrots, bell pepper, snow peas, celery and cabbage that makes it colorful and festive. A perfect dish for your special occasions. 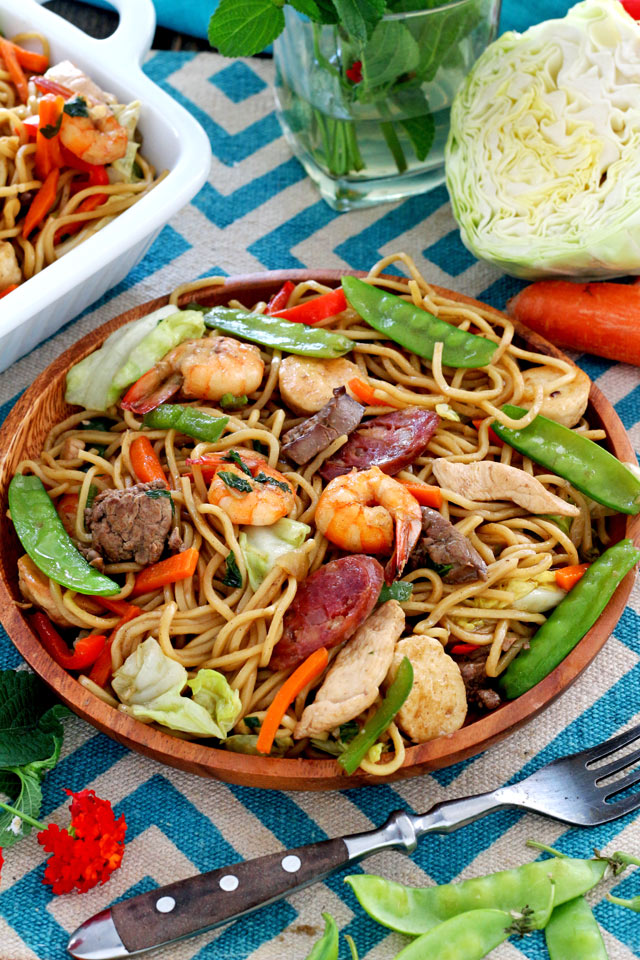 What is Pancit Canton?

Pancit Canton is a Filipino stir-fried noodles made from wheat-flour egg noodles. Such noodle is also known as flour sticks.  It is usually cooked with shrimp, chicken (or pork) and vegetables. The usual seasoning is soy sauce and calamansi is also squeezed on it before eating.

It is a popular dish during birthdays as the long strands of noodles symbolize longevity. But this is only "true" if the noodles are uncut.

Filipino pancit canton is very similar to Chinese Lo Mein. Same noodles, same prep, and even the seasoning. Well, from the name itself you can guess where this dish originally came from. Pancit was brought to the Philippines by the Chinese merchants long before the Spanish came.

How to cook Pancit Canton

It is fairly easy to make and is normally done in just 10-15 minutes if using really basic ingredients.

However, if special ingredients are added, some of them might need additional steps or techniques in preparing them. But no worries, it would be nothing complicated.

This recipe took about 20 minutes to cook and 10 minutes to prepare the ingredients. It can feed four (4) but can easily be doubled or tripled for a larger crowd. 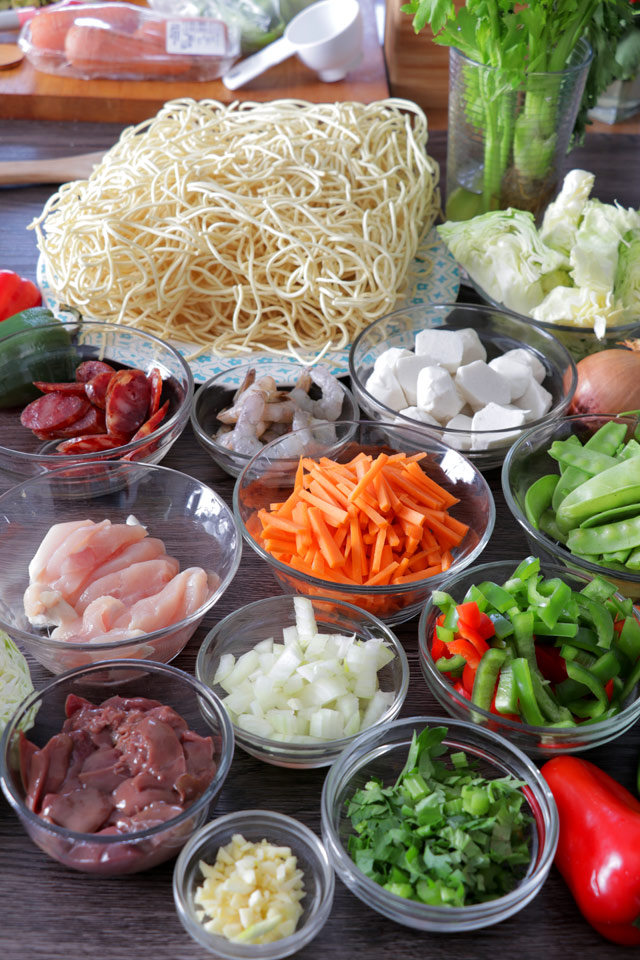 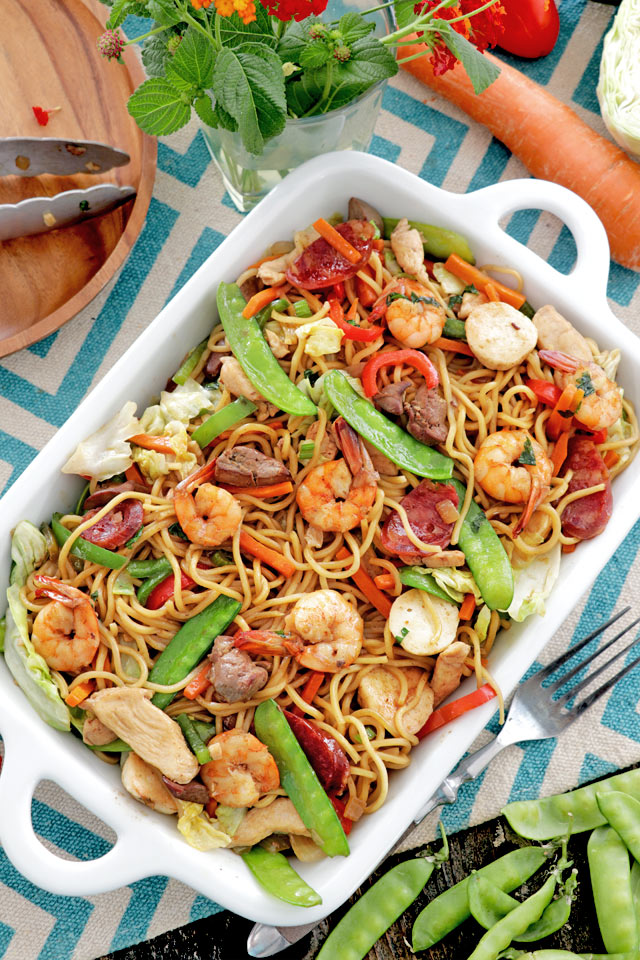 Other Stir-Fry Noodles and Filipino Pasta to try 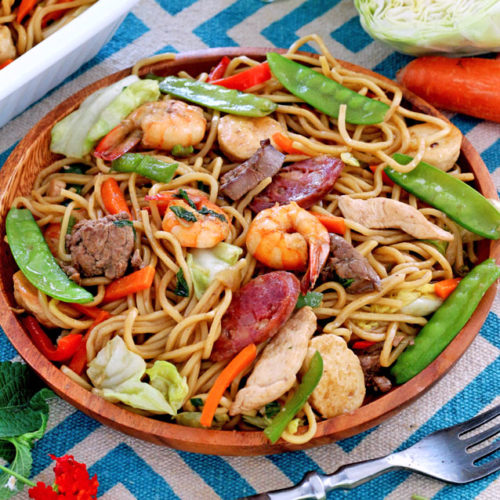 Note 1 - If you do not have chicken broth, just dissolve 1 chicken broth cube in 1 cup of hot water. Note 2 - To avoid mushy and limp veggies, just cook them halfway through. It will go on cooking while still hot even after removing them from the wok. Remember that it will also be returned at the last part of cooking. Note 3 - The pancit canton should be a little saucy once cooked as the noodles will keep on soaking up the liquids even after cooking.