Kalamay Lansong is a Filipino steamed glutinous rice delicacy that you can make using only 4 ingredients. This kakanin is perfect for any occasion or as a simple everyday morning or afternoon snack.

I just love making (and eating) different types of Filipino kakanin! They remind me of happy times like fiestas, get-togethers and various celebrations. An occasion is not quite complete without one. Luckily, even with the influx of modern and international desserts, our native goodies remain to be a mainstay in local banquets. This is one of the easiest of them!

Kalamay Lansong is a tasty snack or dessert made with glutinous rice flour, coconut cream, coconut milk, and sugar. This sweet sticky rice cake is a favorite in many parts of the Philippines, particularly in the Visayan region. It resembles the Chinese Nian Gao or Tikoy in appearance but is topped with latik curds. The term "lansong" refers to the bamboo steamer where the kalamay is cooked.

It involves very simple steps; I started by making the Latik, then the Kamalay itself. You can make both simultaneously but I use the coconut oil that is a by product of making the latik to grease my pans so it has added yumminess!

In Filipino cuisine, Latik has two versions. One is the syrupy caramelized coconut cream used as a dessert sauce. And the one we are using in this recipe is made by simmering coconut cream until the oil separates and savory curds are produced. Check my post on how to make Lakik curds for the steps.

The process is very simple, all you need to do is to mix the glutinous rice, coconut milk, and sugar until smooth. Steam over medium heat until it firms up. Once done, you just sprinkle the latik on top and serve. There's nothing to it!

Will this work without the banana leaves?

If you are in an area without easy access to banana leaves, you can brush the pan generously with coconut oil to prevent the rice cake from sticking on the pan. You may also use parchment paper.

Why do we cover the lid with a kitchen cloth when steaming?

Draping it with a kitchen towel will prevent the water droplets from dripping into the rice cake while steaming, resulting in a smoother and better-textured kalamay.

I don't have a steamer; what alternative can I use?

You can use a large wok or pan, place a steamer rack over the hot water and rest your pan or molder on top of them. It can serve as your improvised steamer. 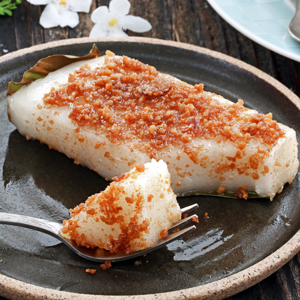 5 from 2 votes
Kalamay Lansong is a Filipino steamed glutinous rice delicacy that you can make using only 4 ingredients. This kakanin is perfect for any occasion or as a simple everyday morning or afternoon snack.
Prep Time: 5 mins
Cook Time: 25 mins
Total Time: 30 mins
Course :Dessert, Snack
Servings =8
Print Recipe Rate this Recipe