This sweet Chinese-style Chicken Asado has just the right balance of sweetness and saltiness. Made from the juicy tender and flavorful chicken thigh that can be enjoyed with rice or as a filling to steamed buns.

The name "Asado" would suggest Spanish origins but this Filipino dish is actually Chinese-influenced as you can see in the ingredients used. Not surprising, since the Philippines was under Spanish rule for 300 years a long long time ago, but longer than that, Filipinos were already trading with China. So I would say it is a mixture of both cultures as most of the Filipino dishes are.

The word Asado —from the Spanish word "Asar" that means to roast or grill, in general it refers to anything that is roasted, grilled or barbecued.

This Chicken Asado is actually a variation of the more popular pork version. that is closely related to Char Siu— a type of Chinese barbecued pork. And similarly, it is also used as filling to Filipino steamed buns, siopao Asado.

In this recipe, I used chicken thigh because it is juicier and brings more flavor as it has enough amount of fats. However, like the common variation, pork can be used instead of chicken. I would suggest using pork shoulder that is ideal for braising and slow cooking. Beef can also be an alternative.

If you are to serve it as a viand, cook it bone-in. But if you plan to use it as a filling for steamed or baked buns, then remove the bones or buy the chicken thigh fillet.

Traditional Filipino Asado dishes do not use Hoisin sauce. But if you have it might as well use it. It adds a nice gloss and thicker sauce. If not, you can simply add 2-3 pieces of star anise or five-spice powder to the boiling liquid. You may also need a sauce thickener like cornstarch slurry added towards the end of cooking.

Other similar dishes to try: 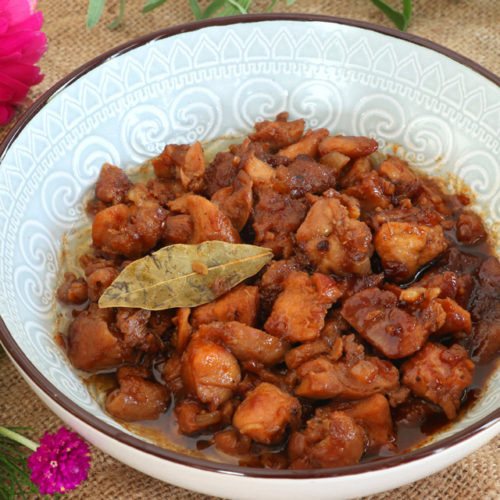 This recipe is good enough for 4 servings as a main dish.  If to use as a filling for steamed buns, it should be good for 10 buns.

This recipe was originally published in February 2015. Updated in July 2020 to include new photos, more tips, and a recipe video.