This stuffed milkfish or 'Rellenong Bangus' is for those who like fish but not the fishbones. It is also cooked in the oven so no oil splatters from frying and less oil.

Bangus or milkfish is notoriously known for having a lot of fish bones. They are also known to make a lot of splatters when fried. Therefore, for those who love milkfish but not all the things I mentioned above, this Rellenong Bangus recipe is the perfect one for you!

What is Rellenong Bangus?

Rellyenong (also "relyeno") Bangus is a stuffed milkfish that is normally fried to a golden crisp. It is commonly serves at special events or occasions as the process involved in making it may not be the easiest or quickest. But it is not that difficult at all.

The meat is, first, separated from the skin and removed while the fish is still raw or uncooked. This has to be done without breaking the skin of the fish. It is then seasoned and cooked with vegetables and spices. It is then stuffed back and the whole milkfish is then fried, or in this case, baked.

How to skin a whole fish?

Warning! The following images contain graphic content! Hehe! Here I am trying my best to illustrate how I removed the fish meat keeping the skin whole and intact.

I for one have an aversion to frying milkfish, well to anything that involves frying actually and you can understand that if you notice the big scar on my right hand on my videos. I share this scar with my mama as we were both in same kitchen accident some ancient years ago that involves frying (chicken). But the fear of oil splatters is still there.

So, since I hate frying, I baked my Rellenong Bangus instead and I think this will be how it is for me from now on. Not only was it painless it is also more practical since I do not have a frying pan that will fit the whole milkfish in

In mood for more fish recipes? Try these: 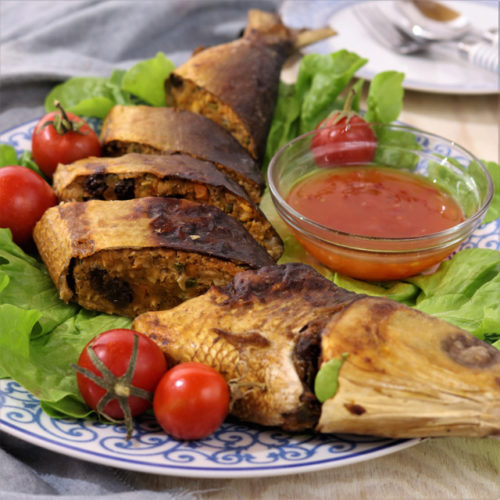 This recipe was originally published in September 2017. Updated in July 2020 to include new photos, more tips, and a recipe video.