Sinigang na baboy (pork sinigang) is an all-time favorite Filipino dish of pork cooked in a sour soup of tamarind. Made, usually, with a lot of vegetables, so it is also very nutritious.

Sinigang has been and always will be a mainstay dish of the everyday Filipino dining throughout the country. A comfort-food to a lot of people. Its lip-smacking sourness will surely wake up your tastebuds and delight your palate.

Sinigang is a Filipino meaty soup that is known for being sour and savory, and sometimes spicy. Serve it with rice and it is a complete meal on its own. There are, of course, different ways to prepare it and has a lot of variations.

Numerous souring agents can be used aside from the most popular choice wich is tamarind. Guava, santol, kamias, green mango, and calamansi are some of the local fruits that are also used.

As for the protein: chicken, fish, seafood, and beef are all typically used. But the most common and favored meat for this sour and savory dish is pork.

What cuts of pork to use for Sinigang?

Any cuts of pork can actually be used for making Pork Sinigang. So it is really up to you what

Here are the list of the basic ingredients in making Pork Sinigang:

How to cook Sinigang na Baboy?

Other variation of Sinigang Recipes to try: 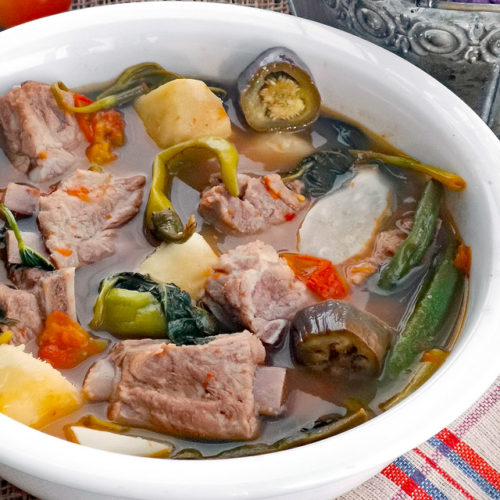 5 from 2 votes
Sinigang na baboy (pork sinigang) is an all-time favorite Filipino dish of pork cooked in a sour soup of tamarind. Made, usually, with a lot of vegetables, so it is also very nutritious.