Omurice - a classic westernized-Japanese comfort food often seen in Asian diners and cafes. This omelet with rice dish fuses the sweet taste of ketchup and the savory taste of chicken fried rice. 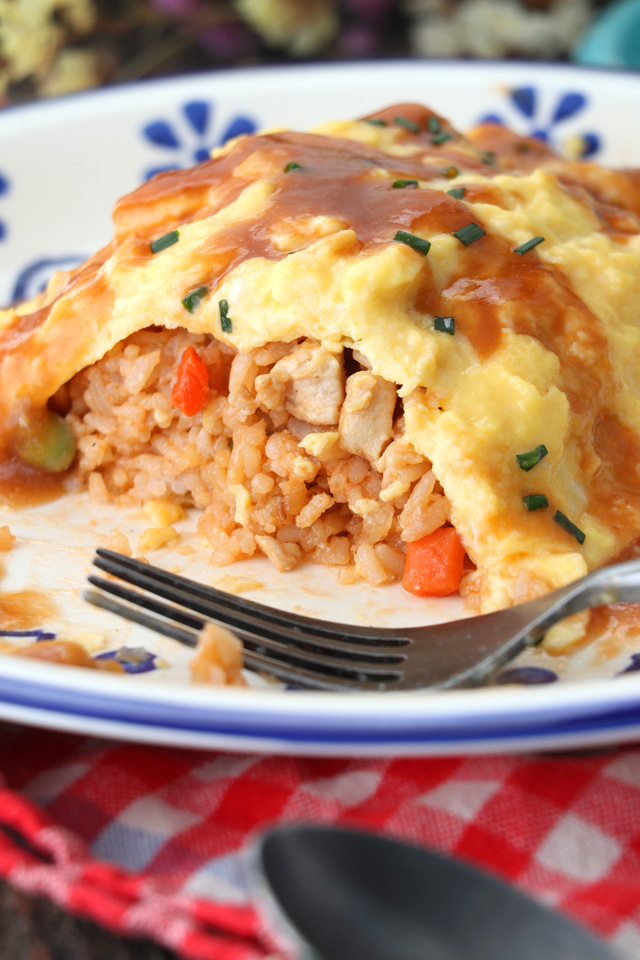 It took me several tries (and many trays of eggs) to get it right.  But I did get the technique in the end. Was it worth it? Yes, it is! And nobody complained while stuffing their faces with omelette the whole day, definitely not Armin, so all was fine. I could have opted for the easier version of this dish but I have the time...and the eggs. And I so wanted to have that soft scrambled eggs ooze down the delicious rice hill as I cut through it. That show alone was worth it!

What is Omu Rice?

Omurice or Omuraisu, made from the combined words of omelet and rice (raisu in Japanese), is basically that— but with a Japanese twist. It’s a fairly popular fusion dish said to have come from a western-style Japanese restaurant in the early 2000s. It quickly spread to their neighboring countries like Korea and Taiwan. The blending of the Western omelet and the Eastern fried rice makes it so you can eat this no matter where you come from!

It’s a pretty simple dish lets you have a lot of room for creativity. There can be many variations out there but it has three main parts, the fried rice, the scrambled egg, and the sauce. 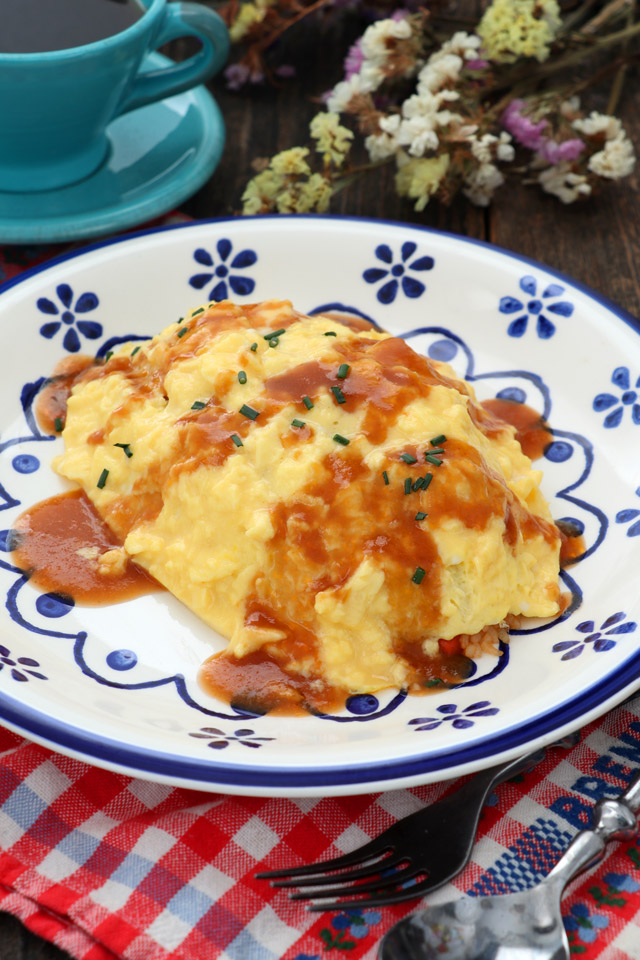 How to make Omu rice?

There are two popular versions of how it's cooked

The traditional way and much easier way is to scramble the eggs on a bowl, pour it on the pan and let it cook. Wait until the downside is cooked slightly but the topside is still moist. Then pour the rice on top then fold the sides of the egg is wrapped around the rice.

The other, more difficult way and the one you are likely to see in Japanese restaurants, is where you first cook your fried rice separately then put it into a plate and shape it like an inverted boat. After that,  a half-cooked scrambled eggs delicately folded around itself, thereby enclosing the half-raw center, will be placed on top of the rice. It has to be sliced open for the inside to ooze out blanketing completely over the rice. A demi-glace is then poured on top.

Being a glutton for punishment (but only from time to time), I opted to make the second one! 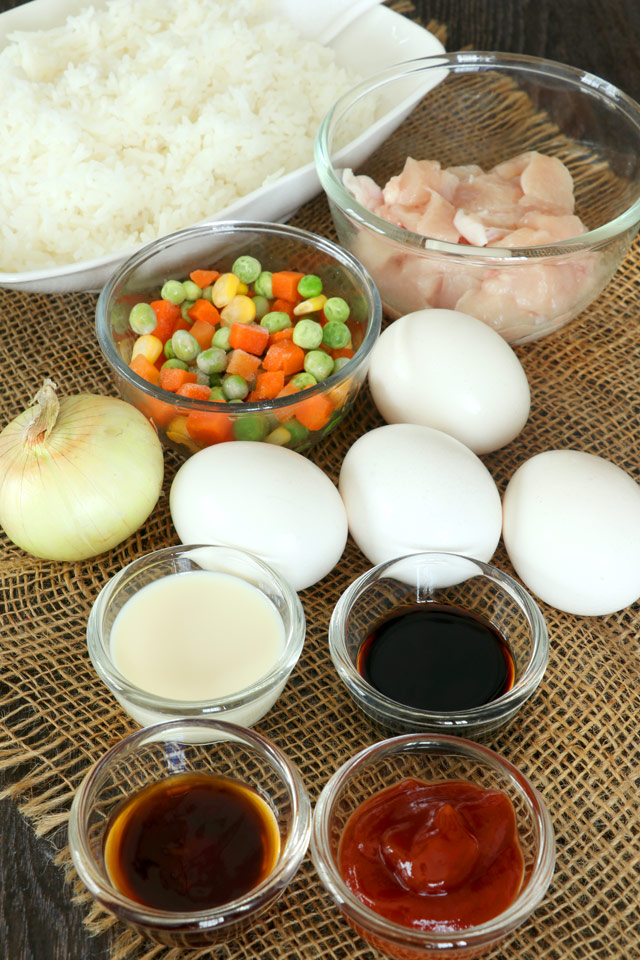 In Japanese Omurice, chicken is normally the main ingredient used for fried rice. You can also use whatever you have on hand or prefer like pork, beef or even shrimp. The vegetables also depend on you, you can add carrots, green peas, onion or even something like celery or zucchini.

But for convenience, using frozen mixed vegetables is an ideal alternative.

For the scrambled egg, you can cook it with butter for tastier eggs. Vegetable oil can also be used. You only need a bit of salt to season it. However, adding a little milk or cream will make it creamier.

For the sauce, ketchup is the most popular choice, especially for home cooks. Omurice can also be served with Japanese curry sauce or demi-glace.

Here is a simple sauce you can at home:

Melt 2 tablespoons the butter into a pan over medium heat. Add 1 tablespoon of flour and mix.

Bring to a simmer until sauce thickens. 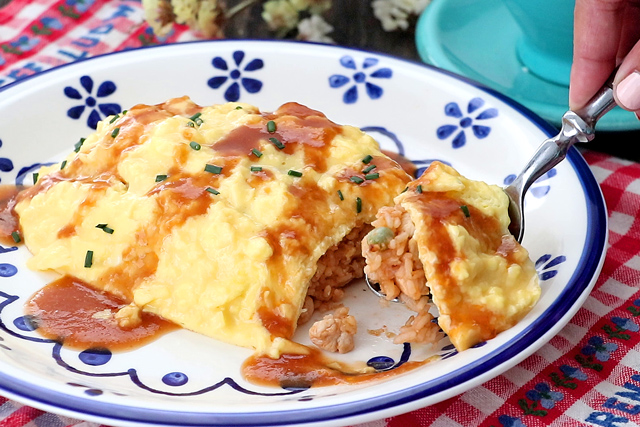 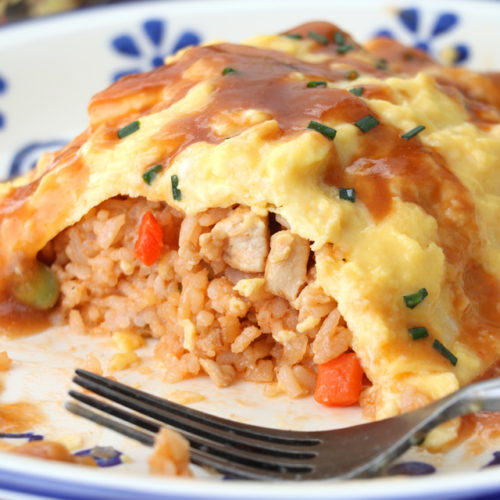