For all the vegetable lovers out there, this Moroccan Couscous Salad is for you!  A healthy dish loaded with roasted vegetables that will surely excite your taste buds with its range of contrasting flavors. 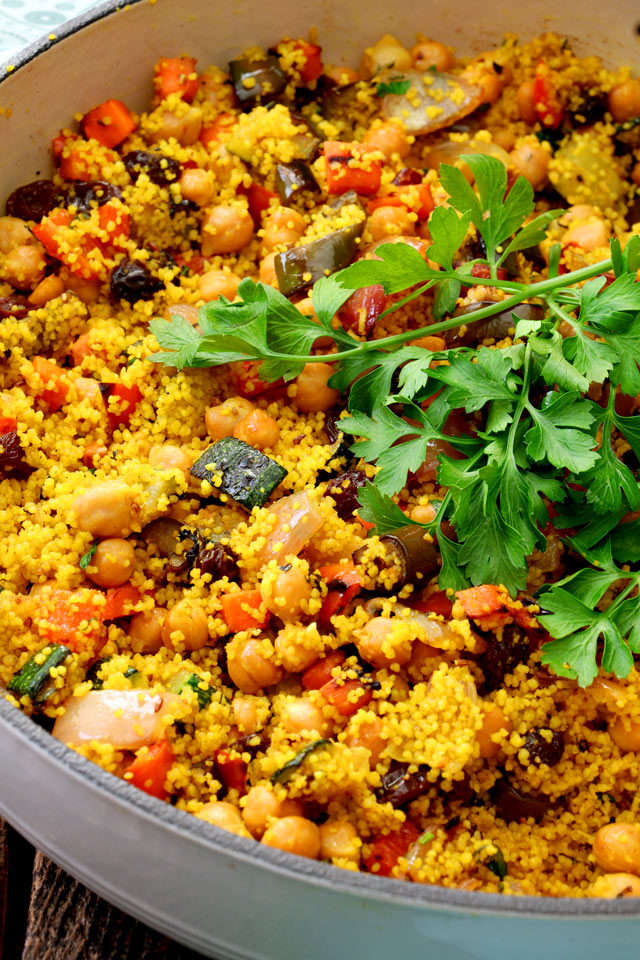 Couscous is a popular dish in many North African countries including Morocco. Though there are various kinds and variants of this dish in the region, "couscous" usually refers to the Moroccan Couscous dish often called the Seven Vegetables Couscous. As a popular local tradition, couscous is prepared and enjoyed by families on Fridays as a communal dish. However, it is also very common dish served during feasts and celebrations and has become an integral part of Moroccan cuisine.

The same dish can be prepared in different ways. Normally cooked on a couscoussier where the vegetables (and meat) are cooked in broth on the bottom pot and the couscous is steamed on the top steamer part. True Moroccan Couscous could take hours to make.

In this recipe, however, we use instant couscous which cooks in 5 minutes. We also opted for roasted vegetables to simplify the process. You can also use whatever vegetables that are in season and although the names indicate a particular number it can be lesser or more. 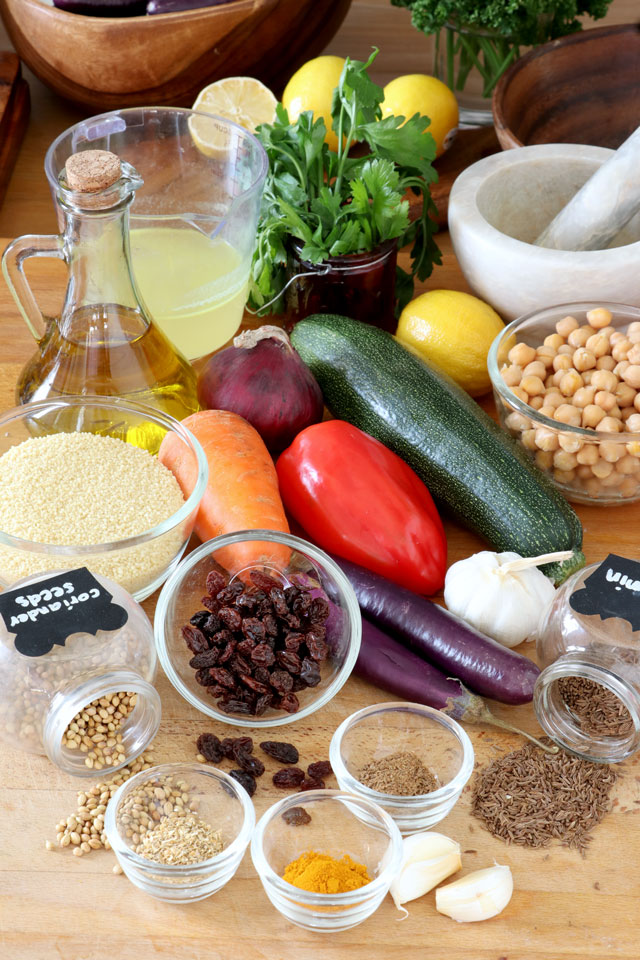 How to make this Moroccan Couscous?

This side dish is very simple to prepare and cook, as it basically uses the broth-boiled couscous as the foundation, topped with roasted vegetables then mixed along with some dressings and parsley.

Using instant couscous cuts the cooking time dramatically. Once the broth has reached a boiling point along with the seasoning and a dash of oil, just let the couscous absorb the liquid and allow it to sit for several minutes. Fluff several times with a fork to aerate and remove clumps.

For this recipe, instead of oven-roasting the vegetables I roasted it over the stove-top.

Preparing the dressing comes next, the dressing is centered around the taste of grated garlic and lemon juice then topped with parsley. I prefer the balance of tangy flavor of the lemon juice and the slightly bitter taste of parsley. Some people also a bit of harissa for a spicy kick.

Once the couscous and roasted vegetables are prepared, mix them with the dressing and garnish, then toss them together. Then just transfer and serve! 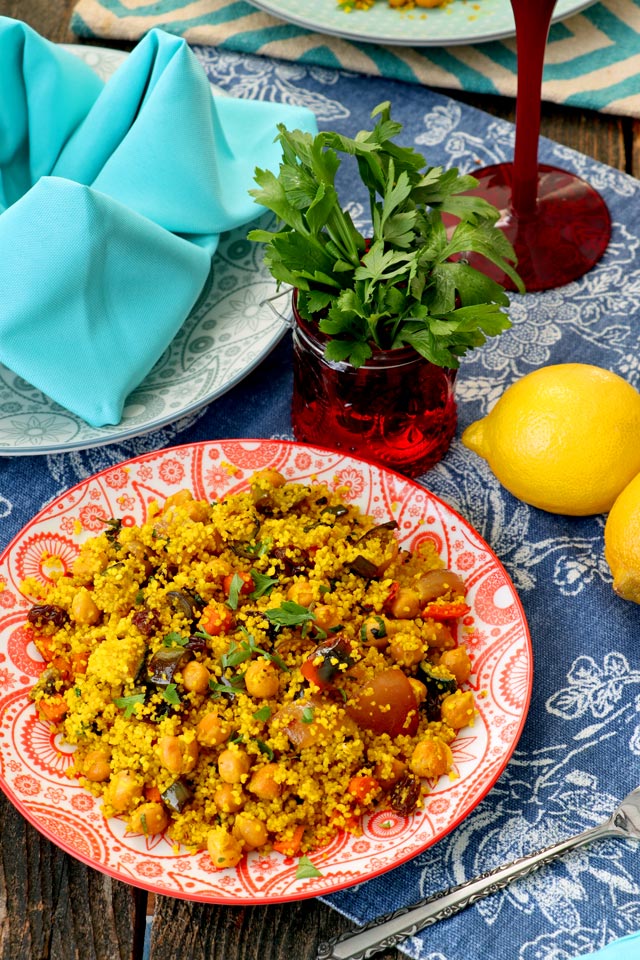 How to roast vegetables on Stovetop?

When preparing your vegetables, make sure to dry them as much as possible. Excess water will cause it to steam instead of being roasted later on.

When choosing your pan, avoid a non-stick one as it will prevent your vegetables from browning. Use a large heavy skillet for best results.

Once you’ve heated the pan enough, pour just enough oil so that it covers the whole thing in a thin coat. It’s also better if you use oils with a high smoke point such as extra virgin olive oil or coconut oil as they will help the vegetables to absorb more flavors. 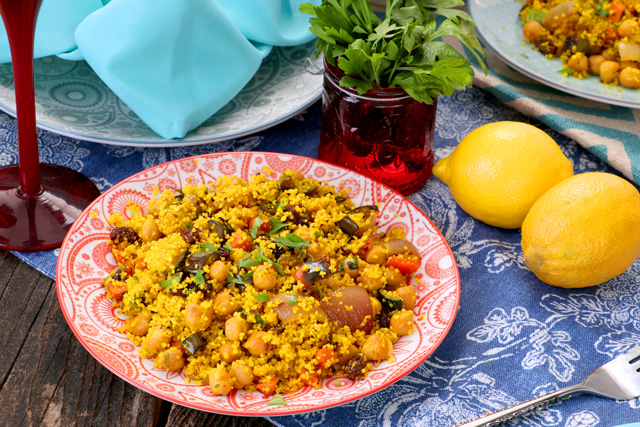 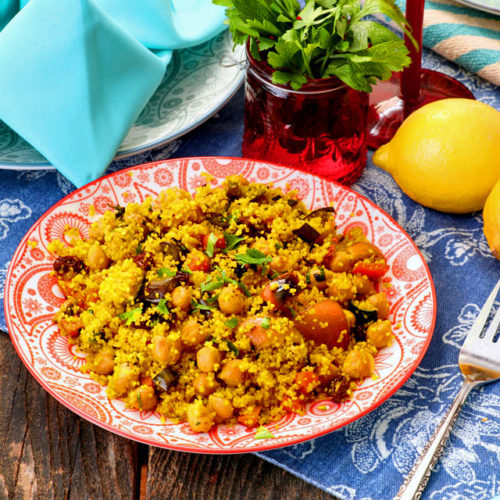 For all the vegetable lovers out there, this Moroccan Couscous Salad is for you!  A healthy dish loaded with roasted vegetables that will surely excite your taste buds with its range of contrasting flavors.
Prep Time: 10 mins
Cook Time: 20 mins
Total Time: 30 mins
Course :Side Dish
Servings =4
Print Recipe Rate this Recipe

NOTE 1: Roasting vegetables in the oven