Summer seems to be really over for this year or at least in this part of Germany. It is starting to feel colder, rains almost everyday and it was soooo foggy this morning.  Oh well! Good thing Armin and I had some (maybe last) dose of summer sun just last week visiting some part north of Italy.

From south of Germany, near Bodensee (Lake Constance), our first destination was the province of South Tyrol or 'Südtirol' in German or 'Alto Adige' in Italian. German and Italian are widely spoken and are both considered as the official languages. On our way there we passed by Lake Reschen (Lago di Resia(I) or Reschensee(G)), a man-made lake famous for the steeple of a submerged 14th-century church. The creation of a dam in 1940-1950 submerge the whole village of Reschen under water, with 163 homes and around 523 hectares of land. 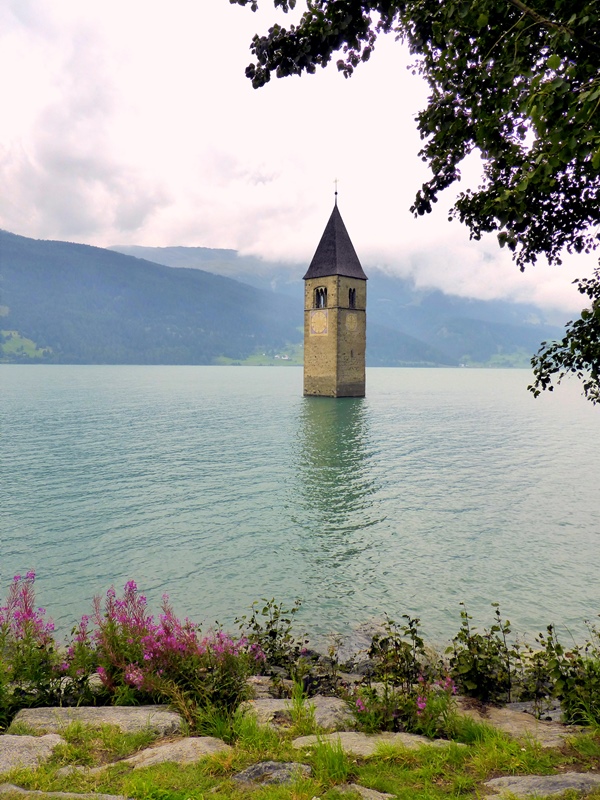 After driving for more than 4 hours or approximately 318 km, we stopped and stayed the night at St. Martin in Passeier, a small town in Passeier Valley where Armin grew up spending his summer vacations with his parents climbing the surrounding mountains. For dinner, we went to Brückenwirt, a pizzaria that have their own brewery and offers home-brewed beer to match their stone oven baked pizzas and homemade pastas. This is where I got my first taste of an authentic, made-in-Italy-pizza when we also visited last year.

Südtirol is famous for having the best apples among other things, so I heard. I am not surprised as the area is mostly covered by apple orchards. It is actually the largest self-contained apple-growing area in whole Europe. 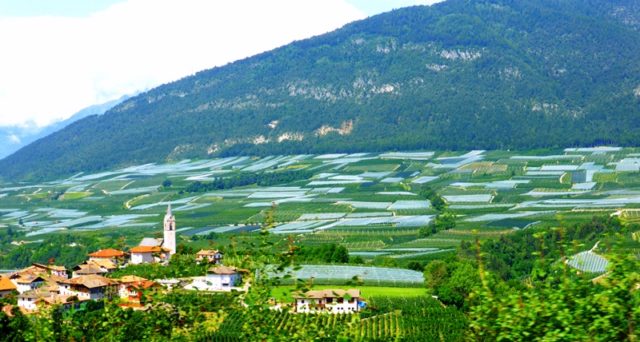 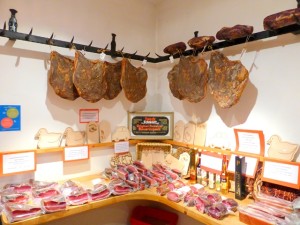 Another specialty from Südtirol is their famous 'Speck' or raw ham. So as per the high recommendation of our host in San Martin we went to this  cozy little store in t
he village called Speck Schwarz, where they make their own speck and sausages. 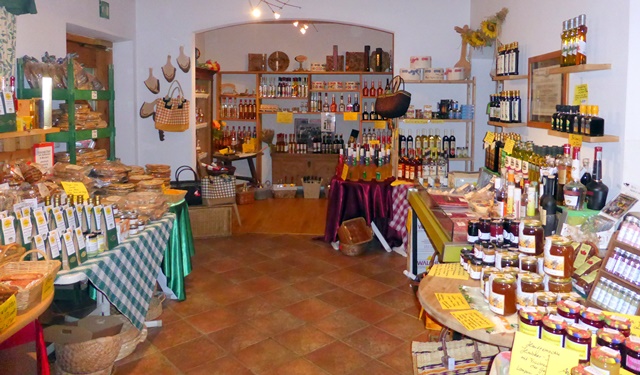 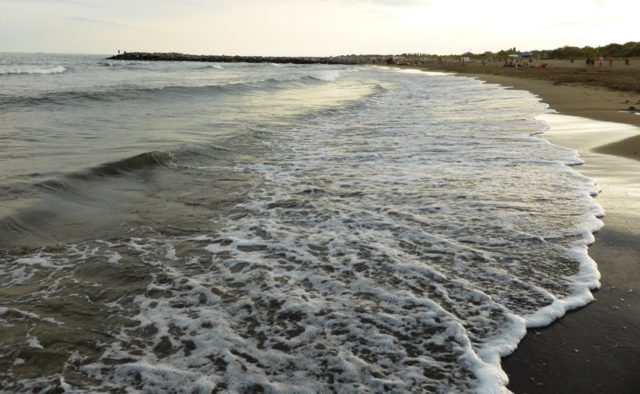 The next day, we drove for about another 4 hours and headed to Cavallino-Treporti and stayed at  Camping Ca'Savio where you can put up your tent or bring your caravan /camper van or avail of their bungalows or mobile  homes. This is our home for 5 days. There are a lot of other camping grounds around to choose from as this seems to be the preferred way to spend vacation in the area. I saw some hotels and rooms for rent but they are a bit farther from the beach unlike most camping sites which is right next to the beach. 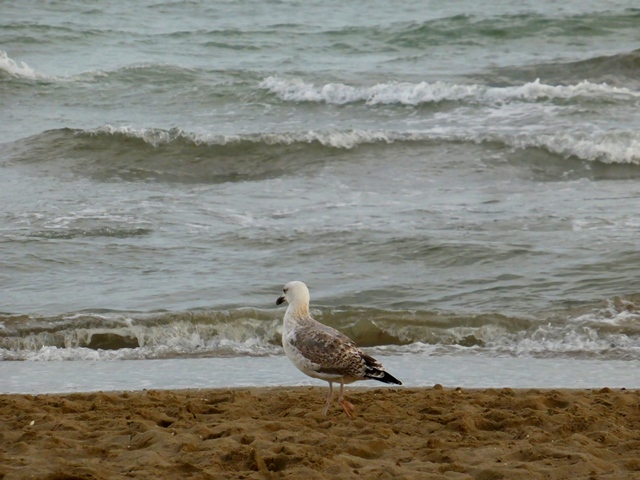 The camp site is huge...it is like a small village really!!! It was fully packed as it was still the peak season so we were posted almost at the end of the site, which is also great as it was quieter but had to walk a lot if we need to go to the loo or wash the dishes or buy something from their grocery store (yup, they have one!) although after a while you get used to it (or we just used the car). But the location of the campsite is really great and convenient.

Near the camp is the small town of Ca'Savio where you can find some shops, grocery stores, restaurants and cafés. We also found a small supermarket where you can buy all the stuff you need (and also those you don't need). We went there everyday to buy fresh seafood and I cook them myself at the campsite. Oh yum!

On our third day, we decided to make the day trip to Venice (Yiippeee). It was really easy peasy! Coming from the camping grounds we drove about 5 km to Punta Sabbioni. There we left our car in the paying car park nearby the wharf, there are lots of them to choose from with fee ranging from €5-€7 for the whole day. From the car park we walk a few meters to the wharf and took a motorboat that brought us to Venice. There are boats leaving for Venice every half an hour. We bought our tickets directly at the booth in front of the dock. The boat ride is about 35 minutes and it cost us €9 per person for a round trip.

The 'Queen of the Adriatic Sea', Venice is probably the most romantic destination one can imagine. With its magical and fascinating narrow streets and canals, the best way to see Venice is by foot or by boat as the city has more than 150 canals and 400 bridges and composed of 118 islands. Best time to visit would be May to mid-June and September to mid-October and July - August could be hot but so what. High waters or Aqua Alta  may occur in autumn or winter seasons and are most likely to happen in November and December which floods the low parts of Venice. The labyrinthine streets and canals of Venice can post as a challenge, even with a map. but that is part of the fun and adventure.

The Doge's Palace - One of the known landmarks in Venice, presently a museum opened  in 1923, used to be the residence of  the Doge Of Venice, the chief magistrate and supreme authority of Republic of Venice for over a thousand years.

The Rialto Bridge -  The present stone bridge was built in late 16th century and is the oldest bridge across the Grand Canal, designed by Antonio da Ponte, similar to the wooden bridge it succeeded. The bridge now houses several jewellery and Murano glass shops reflecting the commercial atmosphere around its area.

Santa Maria della Salute (St. Mary of Health) - The chruch was built in 1631 as a dedication to Virgin Mary for the deliverance of the city after it was assualted with a plague that killed nearly a third of the population at the time.

The Grand Canal - the main street (or highway) of Venice being the largest canal in the city streams across it in an S-shape that divides Venice into two parts. 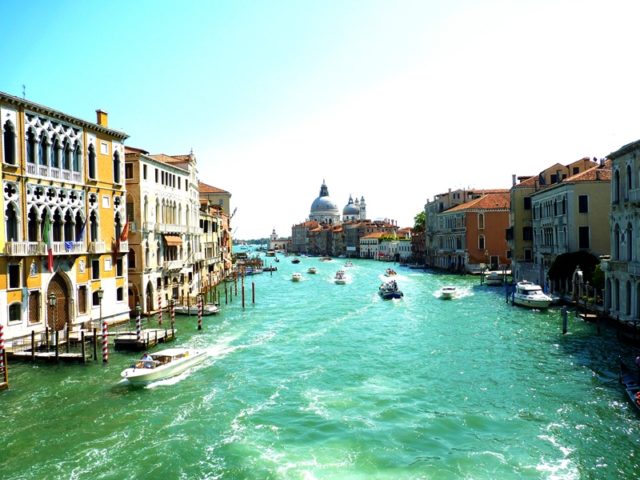 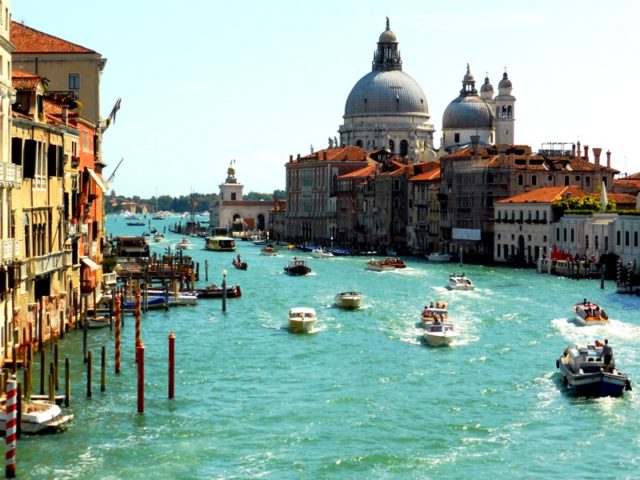 Bridge of Sighs - One of the famous bridge in Venice is so called  because in old times  prisoners who crossed through it, on the way to their prison cells or the execution chamber, would let out a sigh as they caught their last glimpses of Venice through the tiny windows.

Some of the many churches of Venice - One thing you will notice about Venice is the number of churches you will see everywhere. There are more than hundred of them and all are unique and beautiful. 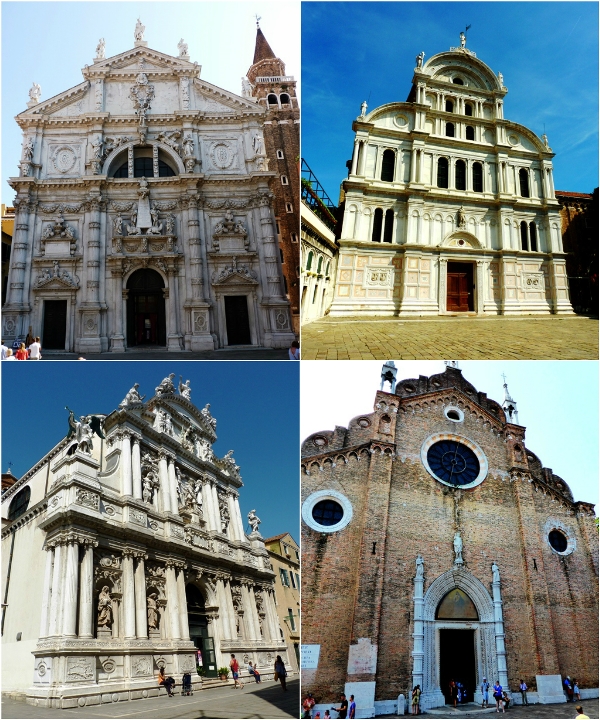 Some of the many churches in Venice

Venetian Masks - are centuries-old tradition of Venice and are typically worn during the Carnival. In the past these masks were worn on many occasions, usually for hiding the wearer's identity and social status that would allow him or her to act more freely to interact with other members of the society outside the bounds the conventional activities or during promiscuous or decadent activities 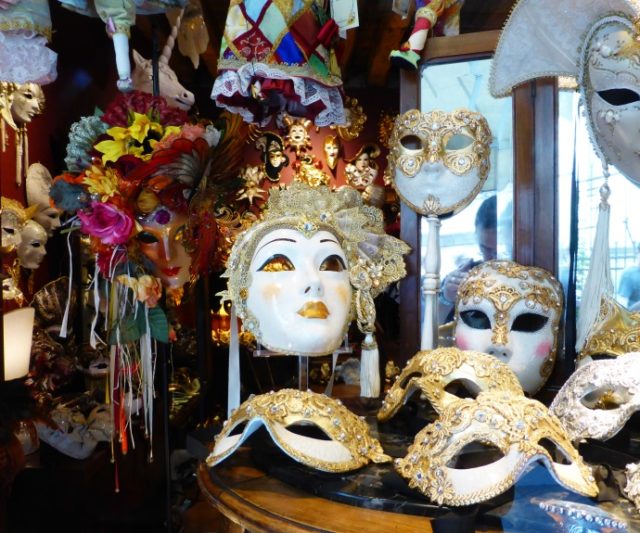 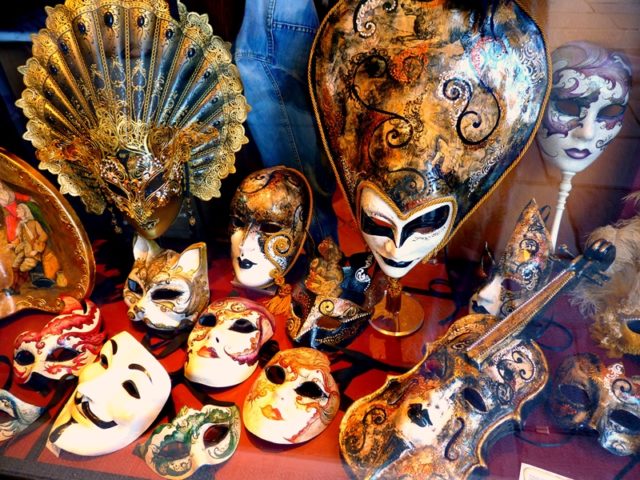 The Gondolas -were once the chief form of transportation through the 'streets' of Venice. Today it is more of an experience that tourists would like to enjoy while sightseeing and it does not come cheap.  Not everyone can be a gondolier. In Venice, it is considered a noble profession that has been passed down from generation to generation through the centuries. Today, to be a gondolier, you need to get a licence which is issued in a limited number and only after periods of apprenticeship and exams to to test your knowledge of Venetian history, landmarks and foreign language skills and your practical skills as a gondolier. 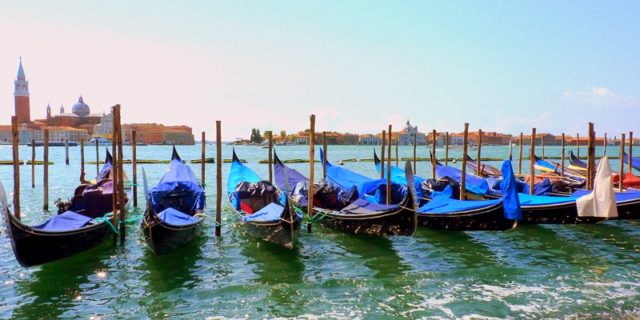 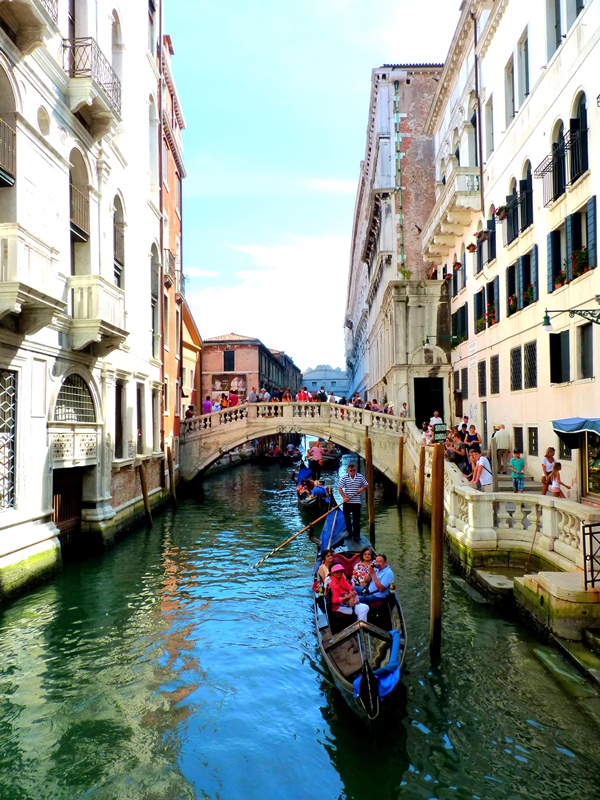 More pictures from our trip to Venice: 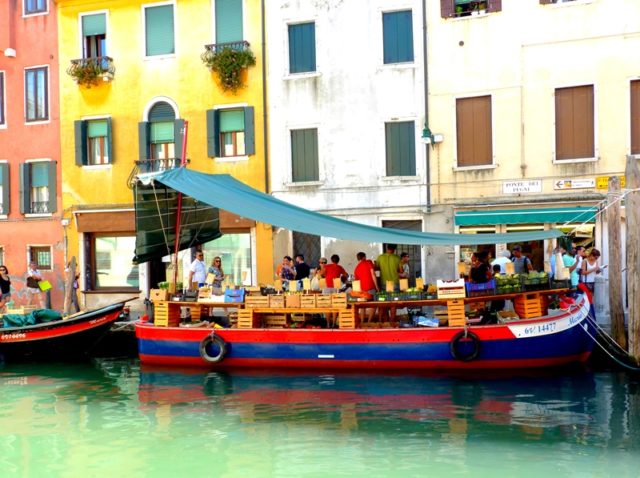 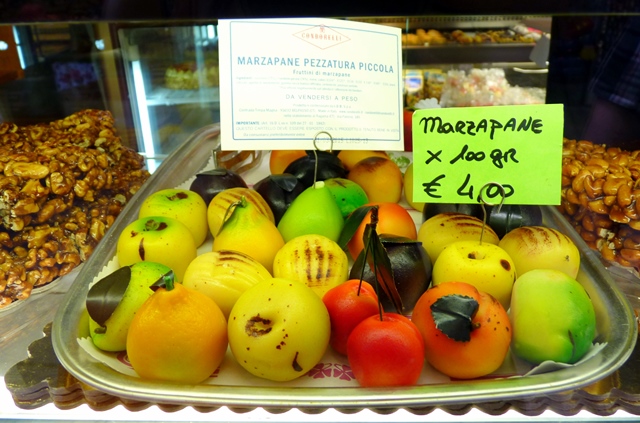 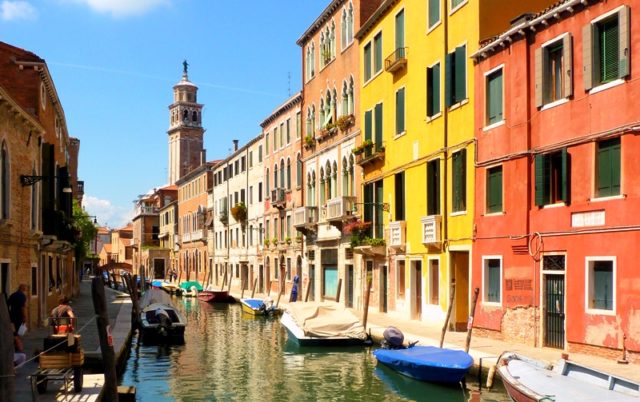 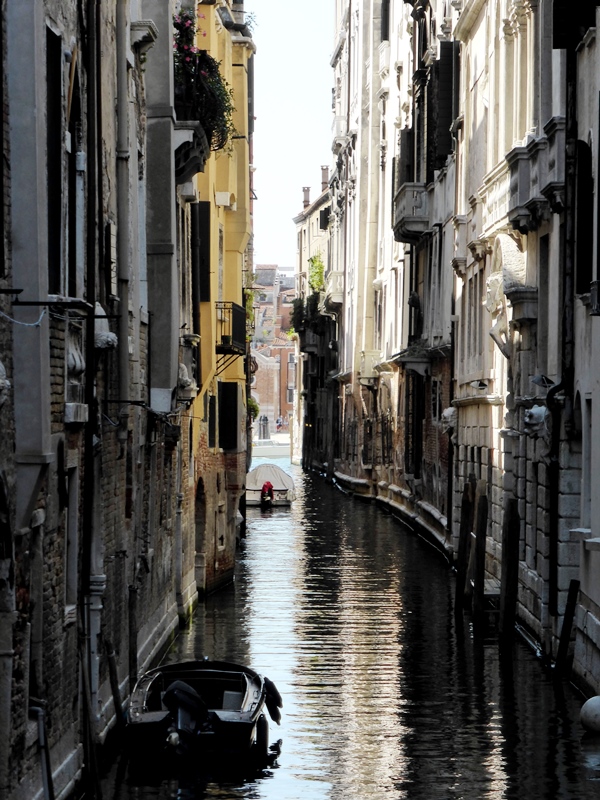 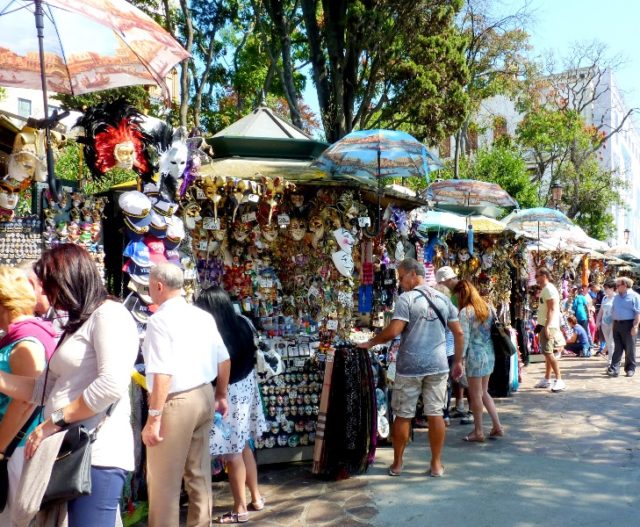 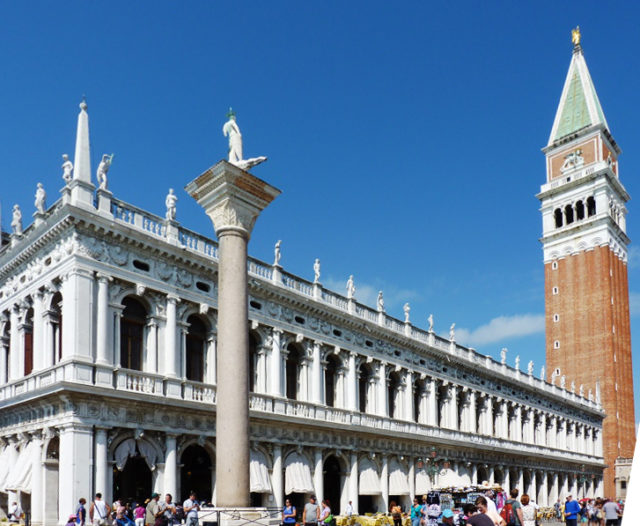 Now, this bridge here below has somewhat of personal meaning to me. You see where Armin is pointing at? That is the exact spot where  my sunglasses fell from my head because I was too eager to have my picture taken! 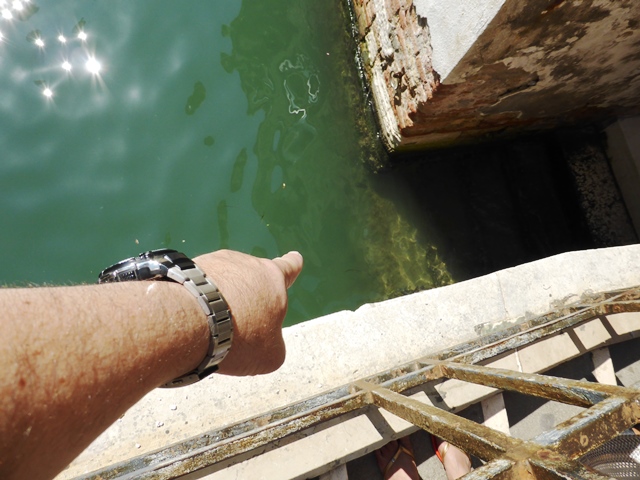 Well, that is it for now. I know we still have a lot more to discover from both places, we will leave that for our next trips! I hope you enjoyed tagging along our trip!