Be amazed by this incredibly delightful "Impossible" Chocoflan Cake that will not only tickle your taste buds but will also blow your mind. With a luscious creamy flan and a sinfully delicious chocolate cake glazed with a rich caramel sauce, it is the ultimate dessert ever!

What is Chocoflan Cake?

Chocoflan or also known as the Impossible cake is a mouthwatering Mexican dessert consisting of three amazing layers of goodness. It has a chocolate cake for a base topped with a flan and a caramel sauce dripping over it. Traditionally, it is made with cajeta caramel sauce which is made from goat’s milk but nowadays, dulce de leche or caramel sauce is also used.

If you've tried our dessert recipes, you'll know am not a big fan of overly sweet food and with this recipe, you'll be surprised to find that it is that sweet at all. Just a heavenly dark chocolate cake, light and creamy whole-egg flan (no eggwhites wasted), and luscious caramel.

How is Chocoflan Cake made?

Despite its complicated façade, it is really quite easy to make.

The bundt pan is drizzled with the caramel sauce at the bottom, followed by the chocolate cake batter, and finally, the flan mixture is poured over it. As it bakes in the oven, the chocolate cake “magically” rises to the top. When the cake is inverted, you’ll find that the velvety flan is now on top of the chocolate cake and smothered with that delicious caramel sauce.  And because of this wonderful phenomenon, this dessert has earned the name the "Impossible Cake".

There really is no magic involved in baking this amazing Impossible Cake. The reason or science behind the switching of the two layers is all about the densities of the cake batter and flan mixture.  While baking, the custard sinks to the bottom as it becomes heavier and more solid, while the cake rises to the top because of the leavening agent that makes it expands and becomes light and airy.

How to Serve and Store

This Chocoflan Cake is an amazing dessert or snack. It would also be an impressive finish for any special occasion or holiday feast. You can make it up to 2 days ahead. Just leave it in the pan where it was baked and let it cool down then cover with plastic wrap and refrigerate.

To serve, prepare a hot water bath and place the pan in it to make sure that the caramel is melted and does not stick to the pan. You can also just place the pan on top of a stove and warm it over low heat. Tap the pan several times from the sides to dislodge the cake and invert it into a cake plate.

Store leftover Chocoflan Cake in an airtight container and keep it in the fridge for up to 3-4 days. 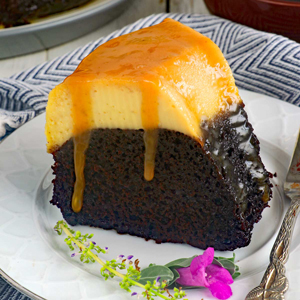