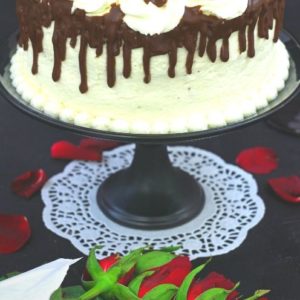 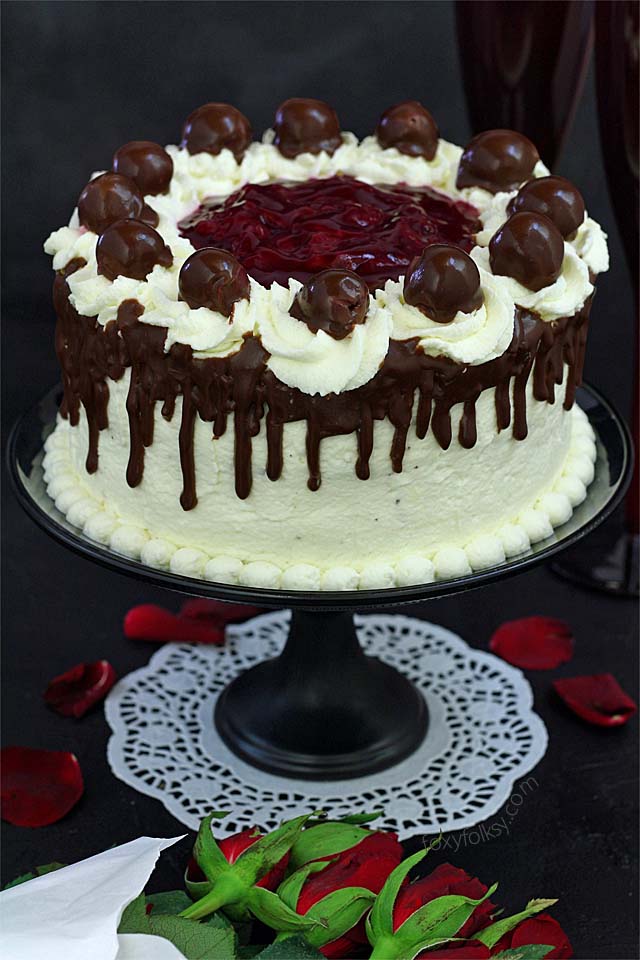 Now, here is a classic! The Black Forest Cake or Black Forest Gateau (British) or what is known here, in Germany where it originated, " Schwarzwälder Kirschtorte" which literally means Black forest cherry torte.

I had Black Forest cakes before in the Philippines (mostly from Goldilocks), but believe me, it's not the same! The original Black Forest cake has Kirschwasser in it. It is a clear fruit brandy made from sour cherries and without it, it does not really qualify as Schwarzwälder Kirschtorte. Well, at least not in Germany. 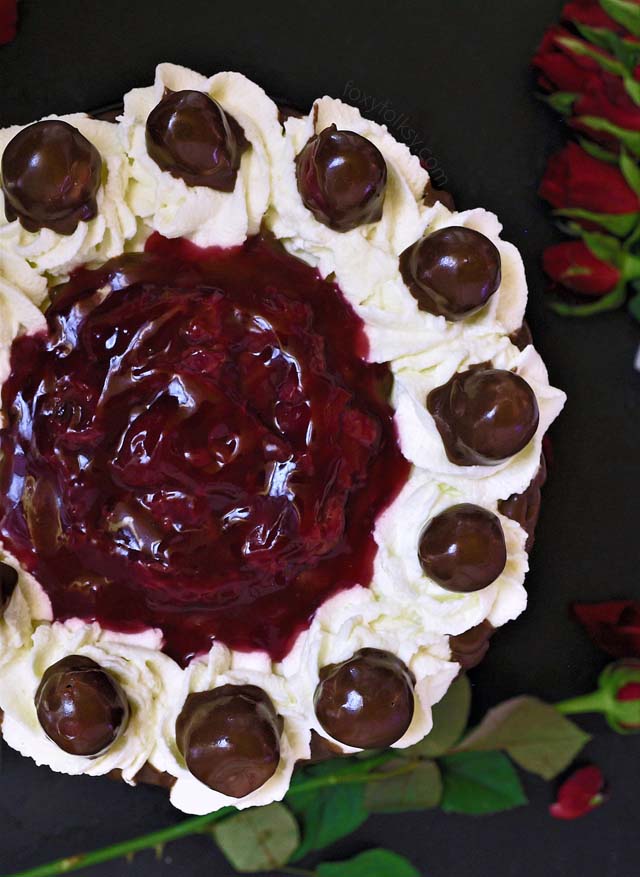 The first time I made this cake, I was still fairly new at baking. I've been only a couple of months in Germany and Armin requested Black Forest cake for his birthday. It was kind of overwhelming for me. Maybe it's because he is German and it is a German cake and I do not know so much about it!? But, oh well, what will I not do for love! 🙂 It turned out not so bad after all (or so he said) and at least I learned from the experience.

And now, 4 years (and a lot of baking cakes) later, I am more confident to share it here and just in time for Valentine's Day too! If you like an easier but equally lovely and delicious dessert, then check out my previous post on Panna Cotta for Valentine! 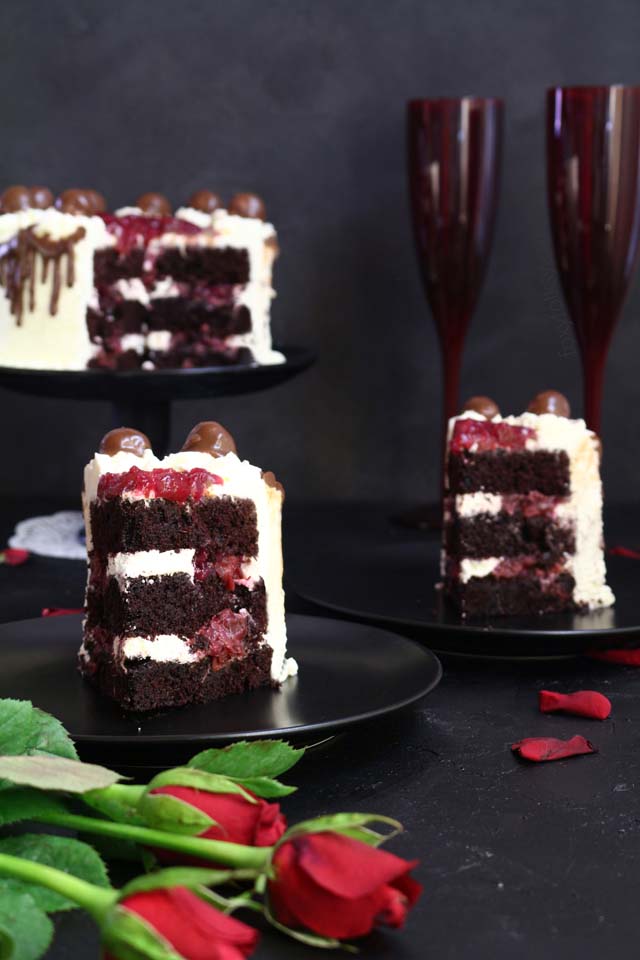 A little info! The Black Forest cake is not actually named after Black Forest, the mountainous region in southwest Germany, like everyone thinks (that included me). Well, at least, not directly. It is named after the Schwarzwälder Kirsch(wasser) which is believed to have originated in the region. Because the kind of sour cherries, dark morello, used for making the original Kirschwasser were grown only in Black Forest. 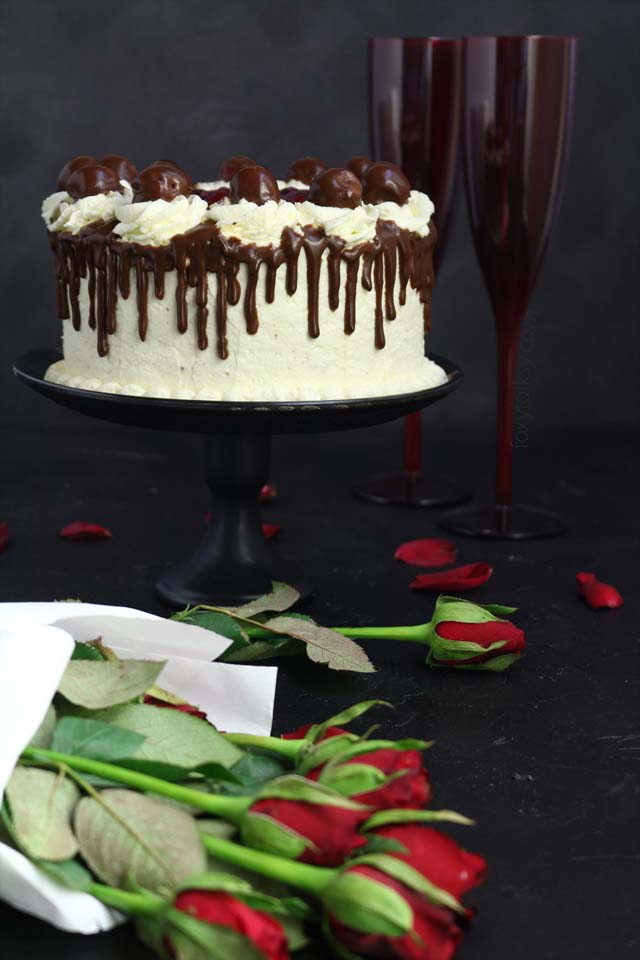 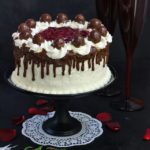 If round pan is not tall enough (at least 7cm high), divide the batter into 3 parts and bake in 3 separate pans. If you have a cake ring, you may also use it while assembling the cake to make it easier. Add some space on the sides and fill it with cream as you layer the cake and remove the ring by slowly sliding it upwards. If you like to cover your cherries with chocolate like I did and use ganache instead of shaving:
Place 100 gram chocolate and ⅓ cup cream in a microwave-safe bowl, nuke for 10 seconds and stir for 1 minute until it melts. If still chunky, nuke for another 5 seconds then go on stirring. Let it cool down but don't let it harden. Dip the cherries one by one before placing on top of cake. Place the rest of ganache in a piping bag fitted with tip with smallest round hole. Or just use a plastic sandwich bag and cut a small hole at the tip. Pipe the ganache just below the rosettes moving it down to make a dripping effect.
To work with the cake easier, place the cake first in the fridge for some minutes so the whipped cream is more stable. The ganache will also harden faster if the cake is cold.