Biko Kalabasa topped with Latik is a variation of Filipino favorite snack, biko. It is a simple-to-make yet super healthy dessert or snack that is great for sharing!

This dish is an adaptation of one of my most popular recipes, Biko, made healthier with the addition of squash. It is a native Filipino delicacy or 'kakanin' made with glutinous rice is cooked in coconut milk and brown sugar then topped Latik. This Kapampangan variation simply mixes kalabasa (squash) puree into the glutinous rice mixture to give it a nutty and sweeter flavor plus a creamier texture. It is a great way to sneak squash into a delicious snack or dessert- the kids won't even notice it!

If this is your first time making a native Filipino rice cake, then you might not be familiar with this delicious savory topping. These are coconut curds created by cooking coconut milk until it evaporates, releasing its natural oil, and leaving behind these solid brown bits.

How to make Biko Kalabasa

Making this yellow sticky rice cake is easier than you think with only 7 ingredients needed. First, just cook the glutinous rice in coconut milk and water with the pandan leaves until liquids are absorbed. While waiting, make the squash puree by boiling it in coconut milk until tender. Then mash them into a cream-like consistency. Once the glutinous rice is done, add it to the squash sauce and add some sugar to sweeten and continue cooking until the rice is fully coated and cooked.

Transfer in an 8x8 square pan, or go traditional by using bilao lined with banana leaves as I did. Then top with latik and you are ready to serve.

You can keep Biko Kalabasa at room temperature the day it is made. After that, store leftovers in the fridge in an airtight container so it will not dry out. I, personally, do not really recommend freezing it as it will not have the same texture when thawed and reheated.

Warm the Biko in the microwave for a few seconds, or serve chilled or at room temperature. It's delicious no matter what!

Is squash the same as pumpkin? Can I use them both?

Though they are from the same plant family and have lots of similarities, they are classified as different fruits. They have different nutritional values and shapes. Also take note that while pumpkin is seasonal, squash is available all year round. And yes, yes can use pumpkin to make this yummy treat too.

Can I use a different variance of rice when making Biko Kalabasa?

Glutinous rice is ideal for desserts because of its high starch content. Replacing it with a different kind of rice may not give you the same results. Glutinous rice is widely available and can easily be found in groceries, supermarkets, and local markets

I do not have banana leaves. What can we use as a replacement?

You may use parchment or wax paper as a lining.  If you do not have this, brushing with coconut oil will prevent your rice cake from sticking on the pan or any dish.

Why the need to add pandan when cooking the glutinous rice?

Pandan gives an extra flavor and fragrance to the rice. You can omit this is you can't find one. 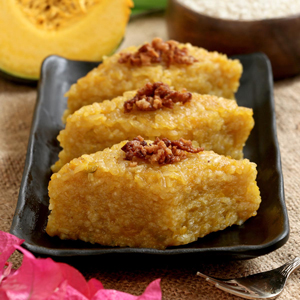