Boneless Bangus (milkfish) belly fried to a golden crisp then coated with a savory soy-calamansi glaze, this Bangus ala Pobre dish is super easy to make using simple and affordable ingredients.

If you have read my Rellenong Bangus post before, you would probably already know my aversion to frying milkfish. I had a kitchen mishap in my teens that left a scar on my right hand. But alas, my love for cooking has always been greater than my fear of splattering hot oil! Plus, who can resist those fatty fish bellies, right? So I am back with another milkfish recipe that does involve frying. However, this recipe is super quick and easy, and I used a boneless bangus belly which is easier to manage in a pan!

What is Bangus ala Pobre?

The Spanish term "ala Pobre" means "the poor". Perhaps because of the economical way of preparing the dish, using ingredients that are cheap and more likely already present in the pantries of most Filipino households. But Bangus ala Pobre and its variations have made it to the menus of many Filipino restaurants, these days, all spruced up with loads of caramelized onions and toasted garlic.

About the ingredients and alternatives

How to store leftovers?

Transfer them in a lidded container and refrigerate for 3-5 days. You can reheat using the microwave for a minute on high. If using your stovetop, reheat the dish using medium heat for at least 2 minutes. 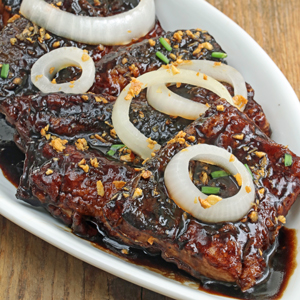