Try this Asparagus Pasta with creamy white sauce. Such an easy and simple one-meal-dish that is both healthy and delicious.

I wrote about this recipe a few years back when we were still in Germany. A different time and place so it seems but it was actually only three years ago.

When we came back to the Philippines, I am happy to learn that asparagus is now cultivated and sold locally.

Here is the old texts from the original post:

Asparagus is in season! In Germany, you see it sold at this time of the year almost everywhere: in the supermarkets, at the nearest grocery stores, at the weekly market or along the roads where local produce put up stands to sell their organic harvests.

Thinking back, when I was still living in the Philippines, I could count on one hand the times I had eaten asparagus. It is not because I do not like them, on the contrary in fact. But simply because they were difficult to find aside from being expensive since they are not really locally grown and mostly imported.

Having not so much experience with cooking asparagus, I was quite in a predicament when we bought a bunch as I didn't know what to do with them.

I know about bacon wrapped asparagus, which I have done several times before and that it is! But that is more like a side dish to me and these days I do not have time to prepare more than a one-dish meal (rice is not counting of course).

When I asked Armin for ideas he said they usually have it topped with Hollandaise sauce.

Then an idea was born! Asparagus + pasta + white sauce. It is perfect!

I like the asparagus to be crispy so I stir-fried them real quick first and just added them to the sauce at the end.

Asparagus is getting more and more popular among the local Filipinos. They are also available in supermarkets almost year-round (200 days a year from a report I read).

Which is great as I love asparagus and even though they are known (and proven) to make one's pee stink, the benefits shadow that one minor setback

Here are just some of the benefits you can get from eating asparagus. 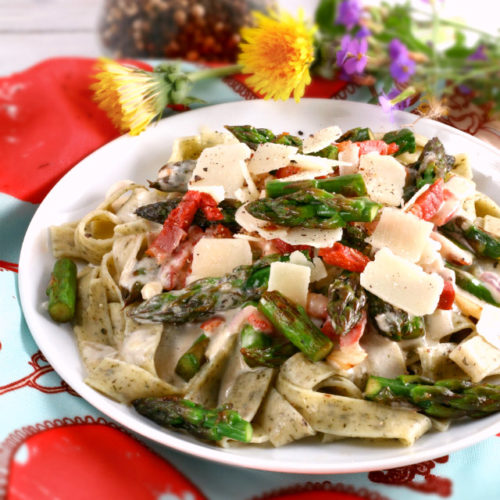